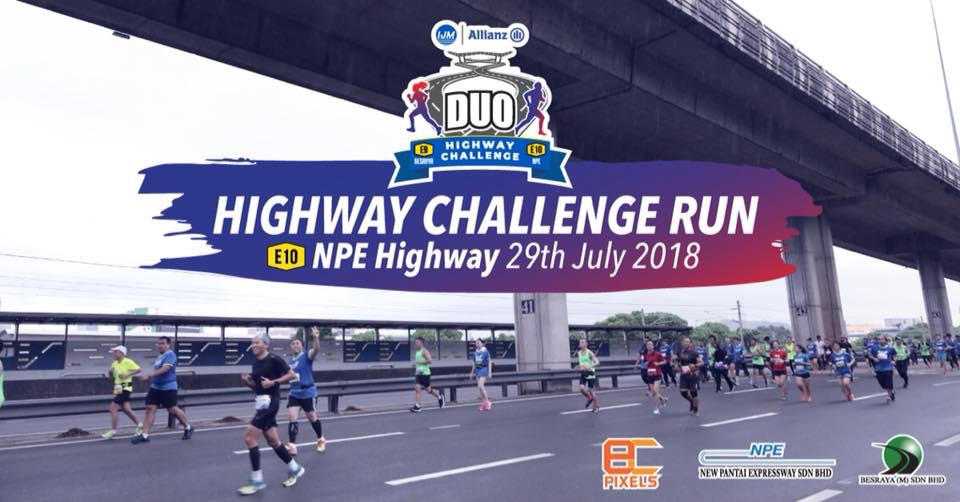 It’s a long story but this event was a personal disaster for me in many ways…!

This event was the second “Challenge” of the Duo. The first was back in April 2018. This event was a 21km race and also a 10km race as well.

DISASTER POINT 1 – before we even start:

The event was organised well overall, however I would add that as I live in Penang I had requested via social media and by email an alternative kit collection day for out station runners on the race weekend.

I did not receive a reply until after the initial race kit collection days had passed and I had collected my kit. As I did not want to miss out on the event, I travelled down by plane with my son the week before the race to collect the kit.  It was then very frustrating when on the Tuesday I received a reply stating that the kit can be collected on the day before the race. I had already spent over MYR400 on flights for the extra day trip down to KL.

This was a financial cost – the actual trip down with Sam was very enjoyable..!

DISASTER POINT 2 – the week before:

After my trip down on the Saturday to collect the kit, I was enjoying a family day in Penang. I will not mention the restaurant where i believe it happened, however I went down with food poisoning after eating a loosely cooked scrambled eggs on toast for Sunday brunch. Sunday evening I had stomach cramps and the upset stomach continued through Monday. By Monday evening I was in bed with a raised temperature and no energy. This continued through until Thursday when I began to return to a sense of normality. At this point I still had a stomach ache but at least I was beginning to have a return to my appetite. As the weekend arrived I was 3kg lighter.

Hitomi was advising me not to run, but as my training had been interrupted by injuries I wanted to have a structured event that I could give my calf another test.

Saturday night I drove down to Kuala Lumpur and stayed at the Sunway Pyramid Suites next to the start. Perfect location to grab an early night and also close to walk to the start line within 5 minutes.

All the kit was ready. I was a little anxious due to the stomach upset and wondered whether I would have the “legs” to get me through the 21km. As the course was running away from the start and then turning back, I knew there would be a real possibility that I have to walk some of the way back.

I thought the neon pink “runRICKYrun” shirt from Brooks would be a perfect contrast to stand out with all the runners in the dark blue 21km race kit.

I was feeling a bit anxious as I was not 100% “fit” for sure and with the weight loss was concerned at the impact this may have on my overall stamina. Wasn’t for quitting anyway….!

Left my room and walked to the start line which was already lined with many runners waiting for the off. I was able to see Linda Wong at the start briefly.

The race commenced after the normal formalities around 5:32 (approx 2 mins late). Deliberately I started slow. Briefly I chatted with Zuhaida Zain (another KLCC Runners Group Member) as we ran down the opening 1km.

As with most of the races that are held on the highways around KL, they are not FLAT…..! Often rising and dipping back again. Long climbs followed by brief downhills.

The first 5km had a net climb of around 20m and was averaging under 7mins per km. This was slower than my marathon target but I was so wearing of feeling weaker than normal.

The next 5 km also went fairly smooth. I was feeling ok generally and the calf was good at this stage too. Still slower than target but this was not a day I was ready to push.

It was around 12km where I was beginning to blow a little. Feeling very hot and that I couldn’t push anymore. The calf was tight but only discomfort when slowing down.  13 km was 8mins52….. slow.

The calf pain was worse on walking, but I was struggling to lift the knees and push on.

Thank you for the several people that recognised me and assisted with shouts of “go Ricky” and “run Ricky run“. It is appreciated…!

16-18km I continued to walk /jog at a slow pace as I just wanted to get the finish as soon as possible. At 16km was when the 10km runners rejoined the 21km runners. So the field that was beginning to thin out was again a little more busier.

19-21km was more walking than jogging.

I had an empty tank. “Bonking” as they call it. It was the first time that I have run and felt that I cannot move any faster, the walk was the best it was going to be. Luckily at this point there were many 10km runners who were also walking.

Overall well managed. Could improve communication as per the request to have an out of station kit collection day. But water stations well manned, security good and no issues with traffic.

No issues – hot and dry with little wind.

21km fairly accurate. Would have been a good test had I not had problems with food poisoning. Would I run it again – yep, I think I would.