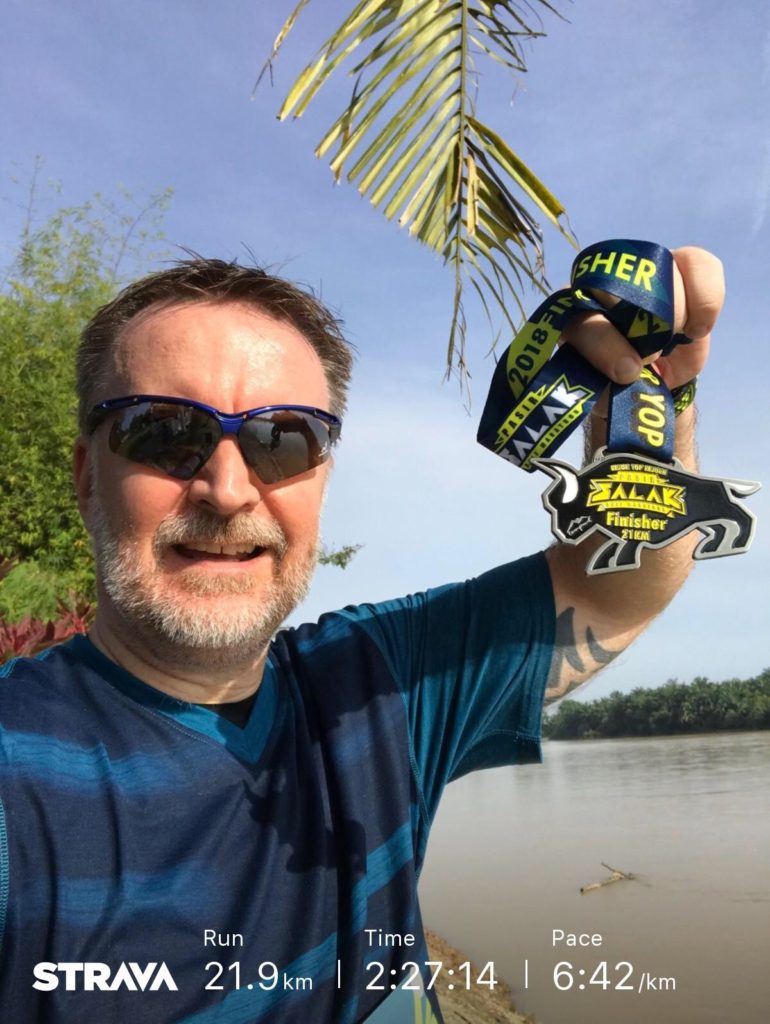 Another weekend another race 🙂

The lead up to this race was quite eventful – Thursday during a normal training run I fell and ended up with a slight sprain to the right ankle as well as several cuts and grazes to my hands and knee. Not ideal preparation and I was considering not running….. 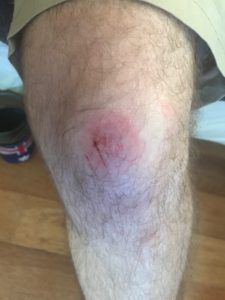 There was still bruising and swelling to the knee and ankle on the morning of the event so I was always going to relax more on this race. That, and the fact that the start was from 7:00 with the heat and humidity left me with a target time of around 2hours 30 minutes. 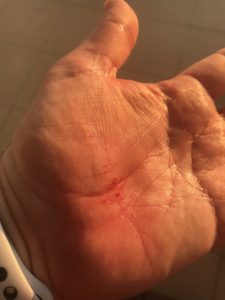 Pasar Salak is approximately a 2.5 hour drive from Penang. So we drove down with the family on Saturday morning, collected the race kit and then headed to a local hotel in Iskandar. Still about 40 minutes drive from the race.

So on race morning I left the hotel around 05:30 and headed for the course. As one of the first to arrive I was able to park very close to the start location. The course was along Sungai Perak and through paddy fields, so very different to every other race that I have participated within Malaysia. 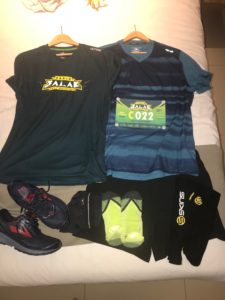 Judging by my race number of C022 in the Male veterans category I assumed that there were not many runners. There were a few more than expected but certainly a smaller field than the events in Penang and KL.

So at the flag off I set to run and stay steady. The first 1.0km along the river was a bit tighter to run due to the narrow road, but as we continued through the first 5 km the runners began to spread out. It was very peaceful running along the river (although with the sun rising it was considerably hotter).

I tried to remain as much as possible in the shade. The first 5km was all high knees at a pace that surprised me a little (5km @ 29mins 31secs). I wasn’t in pain but I could feel the strapping on my right ankle a bit. I did loosen my shoe a little and retied it but it was still noticeable. Fastest 1km was 5:39 which is too fast for my Marathon pace for sure.

The first 12 km was through the Kampung and along the river. It was different. Very little noise – peace was only broken by the sound of feet and heavy breathing.  10km in 1 hour 14 seconds based on garmin. Again this was at a good pace compared to my marathon pace and was even inside the time I had the previous week in Taiping.

As we turned away from the river and headed through the paddy fields it was very noticeable that that shade had gone and as such the heat greatly increased. I did drop the pace and I did notice that the right ankle was aching a little (too tight strapping and shoes).

The pace slowing and drinking more to compensate for the heat meant that my time was dropping back quite a bit.

Noticed that @FIZ SAID was there taking the photos. Thanks Fiz for providing permission to use some of the shots in the website/blog..!

The last 5 km I did feel that I was struggling with the heat and there was no shelter for a lot of the road.

I was able to speed up and give a little more for the last 2km and finish inside the target time (just…). Although this course also measured long with Garmin measuring 21.9km 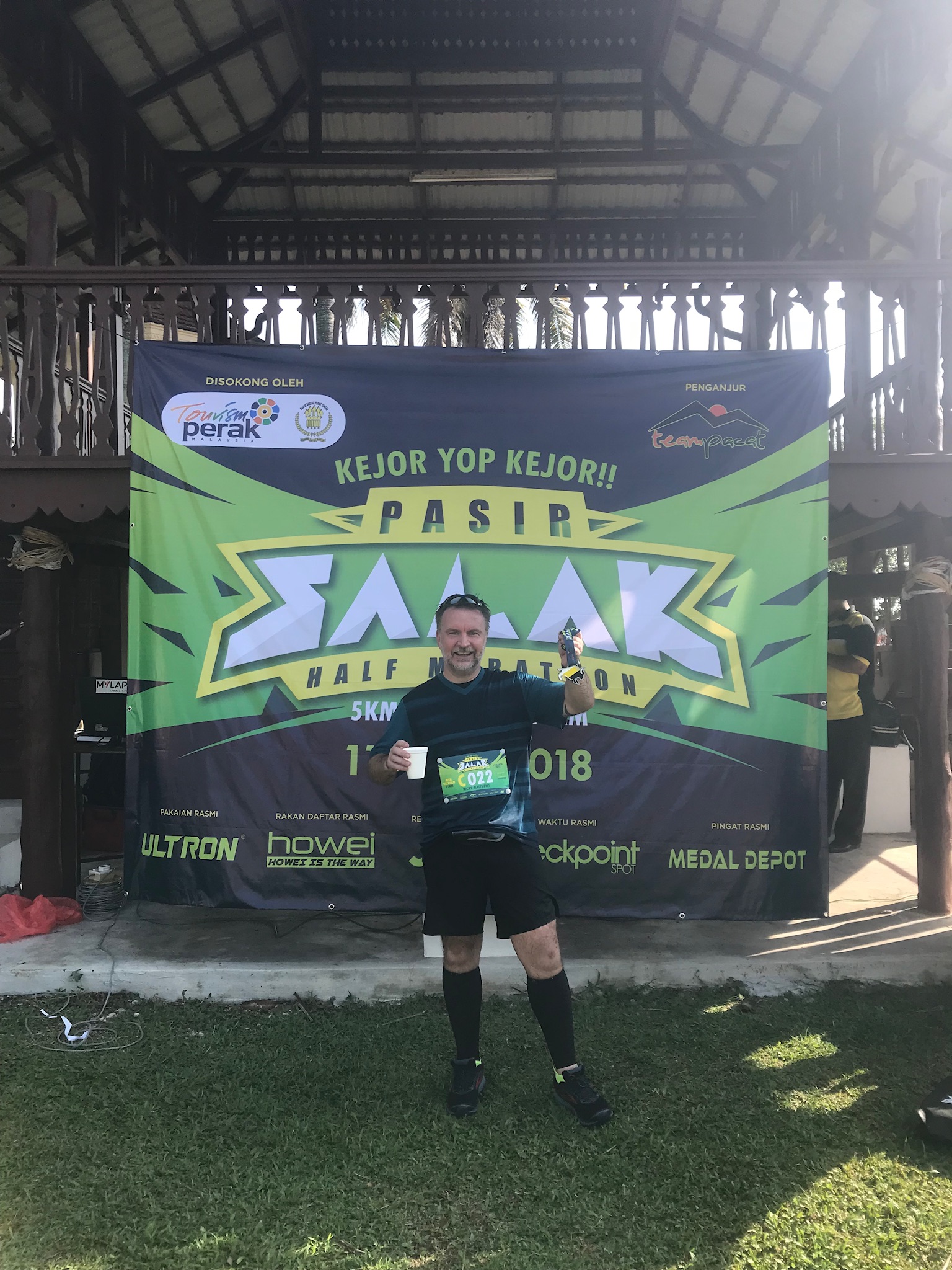 So final stats – official were 2 hours 26mins 12 seconds (net) which was good enough to be 18th of 50 in the veteran category and 92nd of 319 overall. Interestingly if I was able to replicate my time from Taiping the week before I would have been in the top 10…! Something to aim for next time.

So ending in a little discomfort was the only downside to a very well marshalled course with plenty of drink stations (luckily).

My only comment would be that for a half marathon the start was at least 30 minutes later than it could have been. Starting earlier would have made it a lot more comfortable and maybe that is something that the organisers can consider for next year. 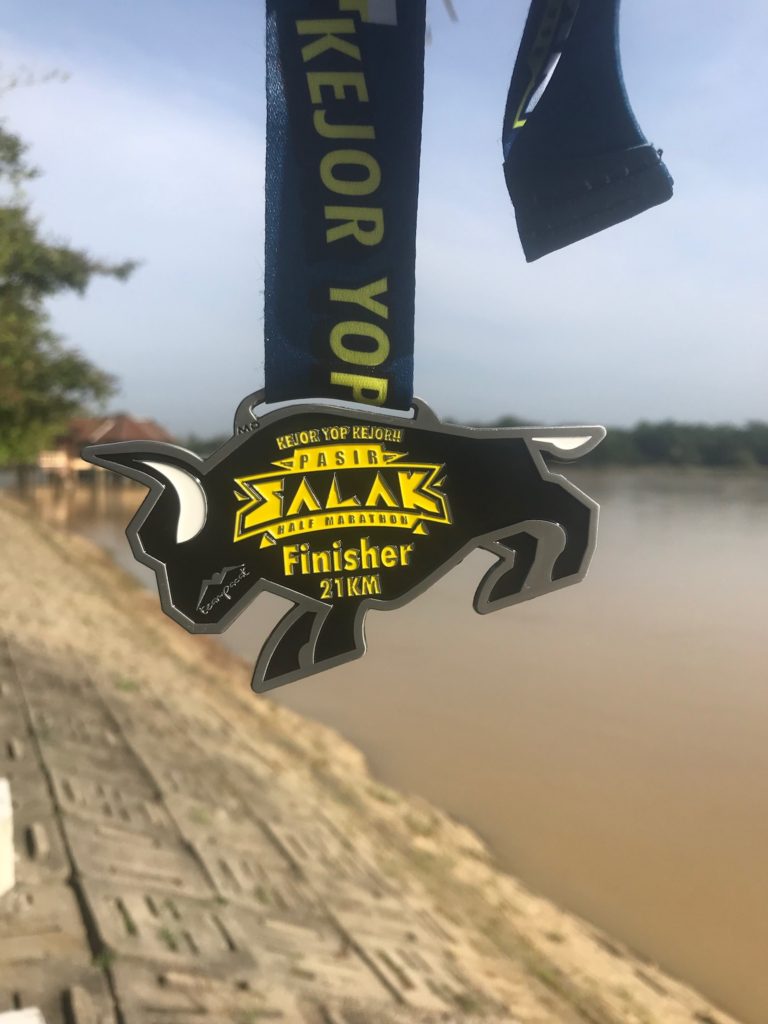 The medal was very unusual in the shape of a bull. 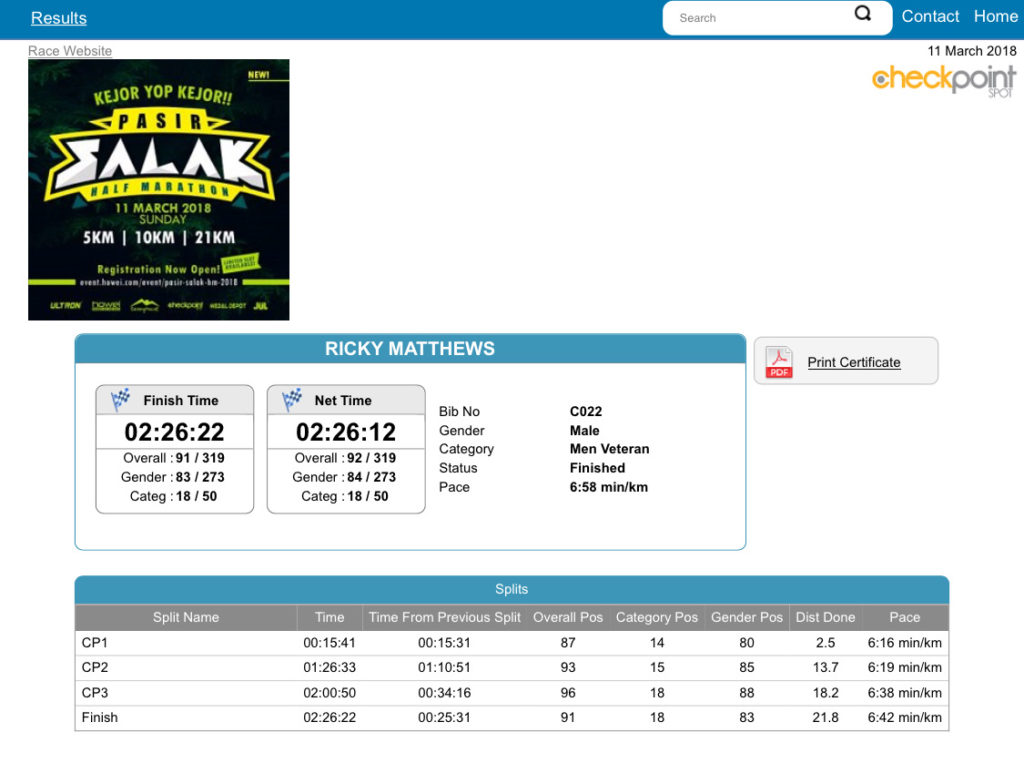 I wasn’t able to collect the “finishers T-shirt” as I was not informed that this was at a different location. I went to collect the medal, drink and some food but was not informed by the organisers about the shirt. After discussion with them by email they have agreed to send to me which is another positive sign of a good organiser – compared to some I have seen in Malaysia. 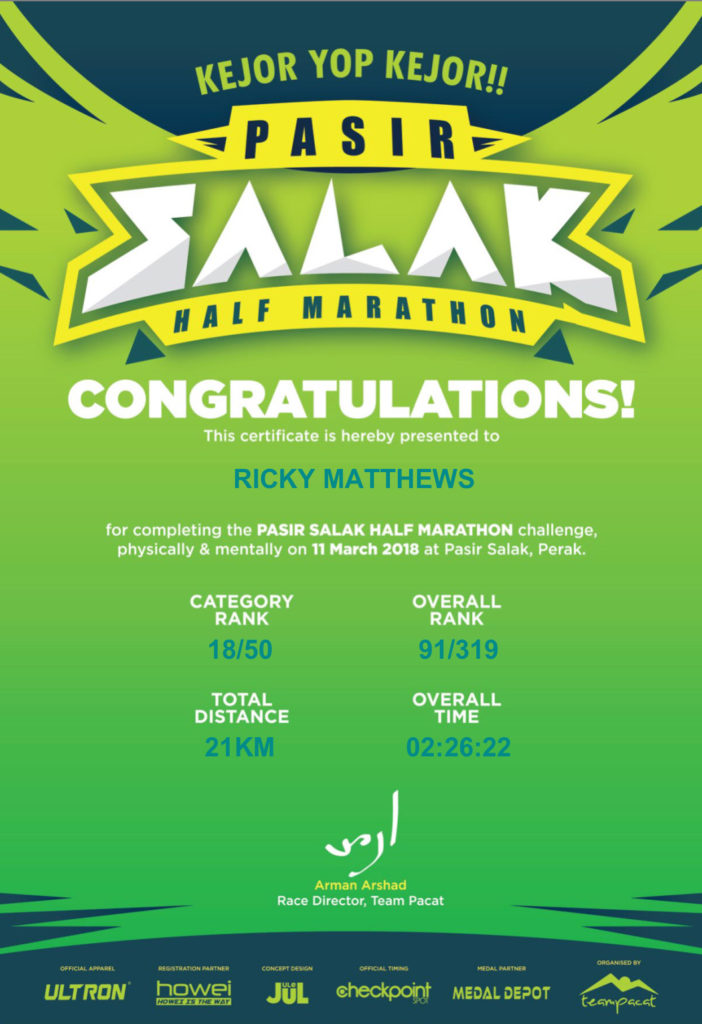 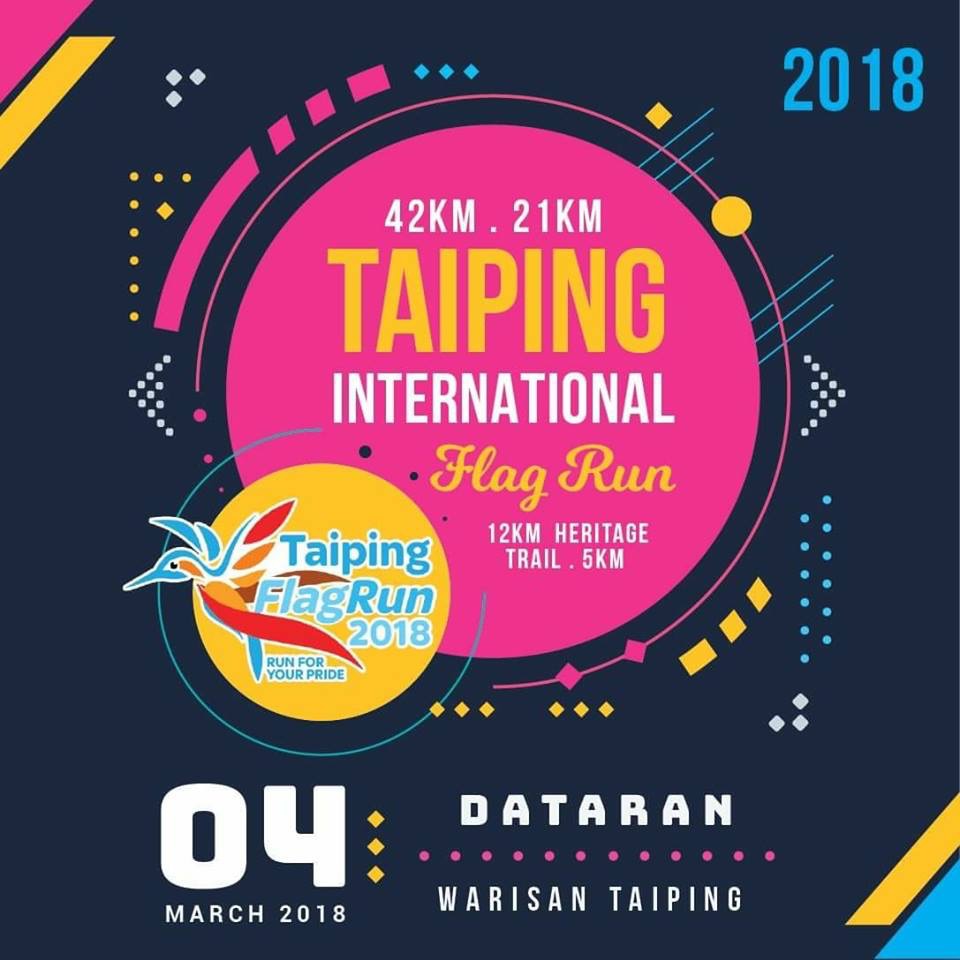 This was the first event that I have ran in Perak and also the first one that flagged off at 01:30 in the morning for the 21km event.

I wasn’t sure whether the start time was either too early in the morning or too late at night….. we stayed in Taiping and tried to sleep in the hotel around 22:00 for a couple of hours. Not really successfully however when I woke by the alarm around midnight I felt ok. The conditions were perfect thanks to the late night rain which brought the temperatures down.

Our hotel was around 2 km from the start so Martin & myself decided to walk/jog to the start to warm up.

At the start line we were able to meet up with Kevin. Although there are always pre-race nerves (anxiety) I felt good and believed I could run well. The support from Glenn at Asia Physio and the advice from him, coupled with the “runFASTER” program from Mark & Jeff at “TheRunningPlan” had given me renewed confidence to at least put in a fair performance. With the overnight rain I felt like the conditions (cooler) would also be very supportive too. I had set myself a target of 2:20 originally and then adjusted this to 2:15 due to the favourable conditions in the morning.

The race started on time and off we set – it was a first for me to run with a headlight and the GoPro strapped to my hand,  I was also kitted out in my new sponsored kit from BROOKS RUNNING MALAYSIA.

The first 5-6 km I quickly got into a rhythm and the “high knees” strategy from Glenn felt positive. Still not 100% natural but certainly not as awkward as I felt in his Physio when he original gave me the advice…!

The km’s Continued to click by and reached the halfway stage in around 1:02 which was probably the fastest I have been in 2018. Still a long way off my PB but I am 20 plus years older now 🙂

I did develop a couple of twinges in the quads (which is probably due to the new running style) so switched to alternating the high knees with my normal strides.

I could finally see the finish in sight and I was inside my 2:15 target for the day…!

As per the above video, I did not push the last 200m – finishing without an injury was the most important. 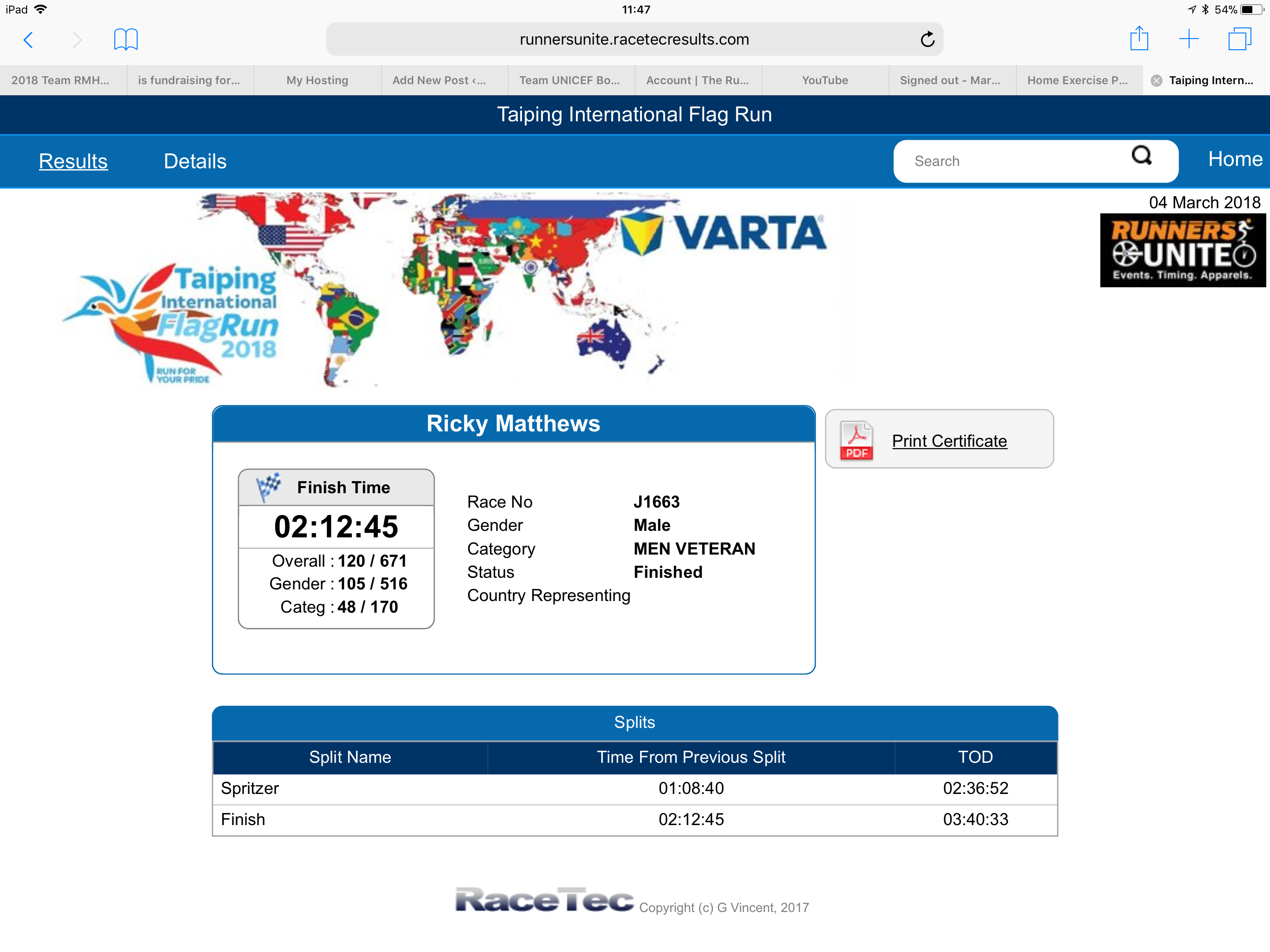 Finishing in 2hours 12 minutes and 12 seconds (net) for my fastest 21km of the year. I was well pleased and also a little emotional as this seemed a good improvement on previous times. Finished in the top 20% of the overall field.

With thanks to (in no particular order): 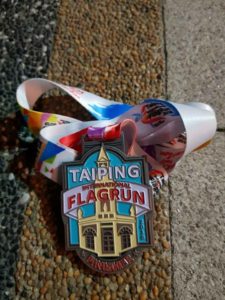