The lead up to this weekend run was problematic for sure.

Since Boston I have had intermittent problems with my calf muscles. Firstly the right calf and then the left calf. Not bad enough injuries to stop running but certainly it has hampered my training. 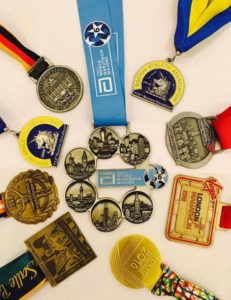 On the Saturday we had to collect the race kit. I did this after the Saucony Run in Gurney. It was great to have a warm up 4km jog with fellow runners and then listen to Choo Hooi Lim talk about his path to becoming a 6 star finisher. To see all the medals lying there was another form of motivation.  The Abbots World Marathon Majors 6Star Finisher medal is huge and fantastic recognition for those who aspire to complete the 6 races.

Post run it was a quick shower and then headed to collect the Penang Race Kit in Georgetown. The queue was huge and meant that we had around 45minutes to 1 hour waiting to collect the kit. Last time I had an issue like this was in Tokyo for the marathon but that had over 40,000 people. So I am not sure why the queues were so long and slow here? I did not do the race last year so cannot compare to this. Any comments?

Collected the kit and was then ready for the race.

Sunday morning was an early start at 04:30am. I arrived early and was going through my race plan.

Although I had entered the 32km category, I did try to change the week before due to the lack of training. I was told that this was not possible as all T-shirt, medals etc had already been ordered.

So the option I decided was to run the 32km race but to stop at 21km (which by coincidence was immediately outside my home) which was perfect.

Setting off slow at 04:30 we meandered our way around Georgetown and then started to head out towards Tanjung Bungah. At this point the course was more or less flat and weather was dry.

Water stations were aplenty. Roads were marshalled well. All going to plan.

Calf was holding up quite well and time was ok at this point. Wasn’t trying for any PB as the aim was to use this as a training run and building up the distance.

Upon reaching the Tanjung Bungah area you then had to climb Pearl Hill. I am very familiar with this route as I live very local and use this as part of my hill training. However there was one key difference now….. the heavens opened and we were now in a heavy storm. Not great when you are trying to climb and descend the hill. The rain was relentless (like in Boston, however it was now warm rain which was very different).

I went through the next two checkpoints and was surprised that my calf was holding up so well under the strain.

Upon reaching the bottom of the hill I was very close to home around 21km.

I heard the words “Daddy”……. It was Hitomi, Sam & Daniel – all waiting for me outside of the condo. I ran across the round to give them a quick kiss and say “hi”. As I was feeling ok, I had already decided to continue onto the finish if I could.

Just by chance, as I was seeing my family, there was a race photographer on the other side of the road and he captured the family moment on camera. Just by chance…!

I was surprised that Hitomi and the boys were waiting to cheer us on in the rain. Buy I was so glad that they did.

I think I should have taken one of the umbrellas……. lol

So I then set off to run the final 10km into Georgetown. 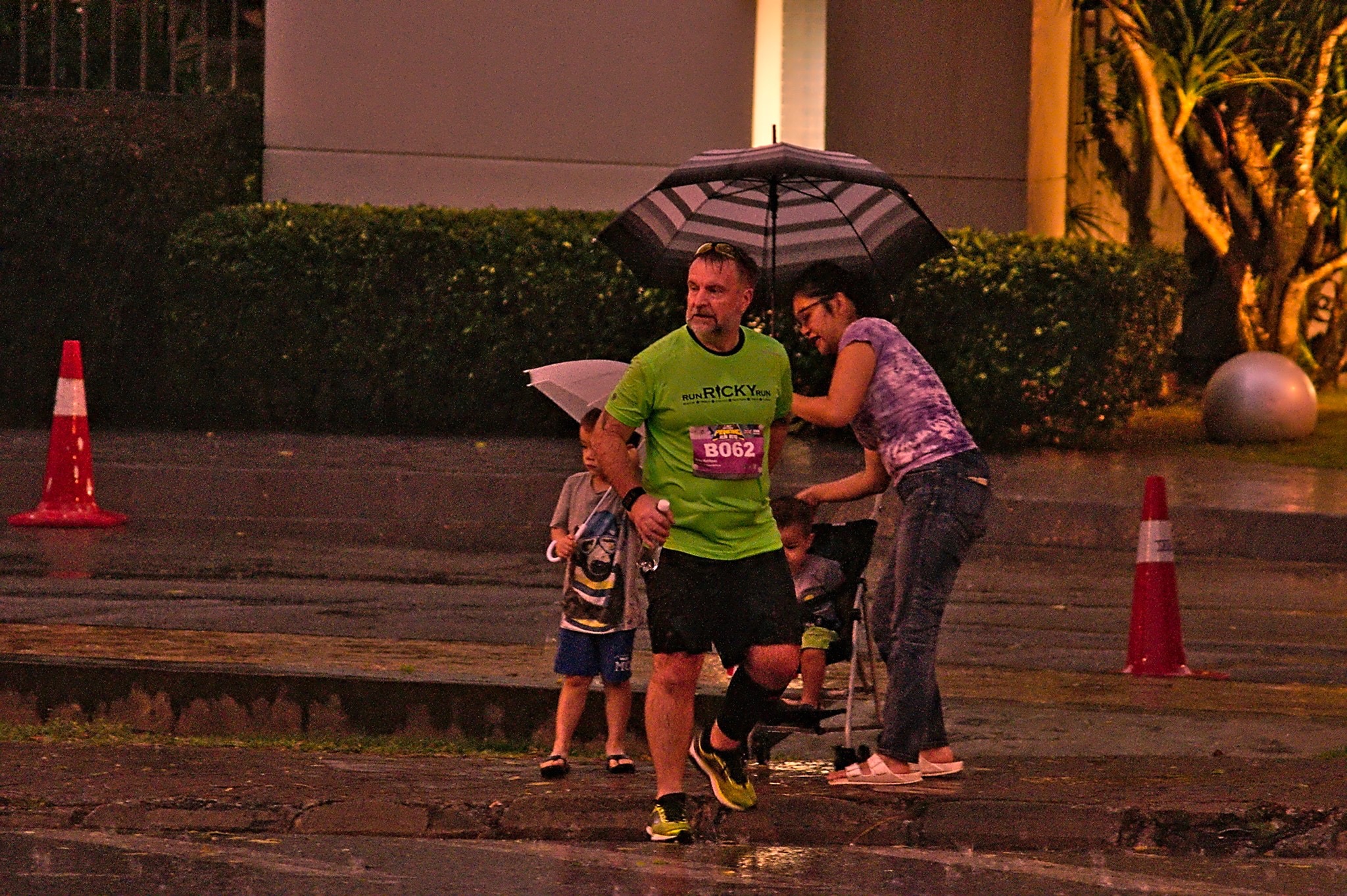 As we entered into Straits Quay the rain started to subside a little and the sun began to rise. At this point there were many 21km runners that were joining the mix.

The last 10km was slow and rather uneventful as the route was my normal LSD run of 20km return to Fort Cornwallis and back. I knew the route well and just plodded along the path/road.

At this stage the roads did have cars in places, but you just needed to be sensible.

I was lucky to arrive at the finish at the same time as my fellow HOWEI AMBASSADOR – Kevin Kamal who was finishing the 21km course. We ran the last 300m together to the finish.

It was good to finish the race – time 4:08 which was slower than I would like but I was not expecting to do the whole run anyway.

It was also great that Hitomi had driven to the finish to bring some dry clothes to change into. The last two long runs that I have done have had very strong showers.

After collecting the medal, finishers shirt and some snacks I went to meet the family to change. 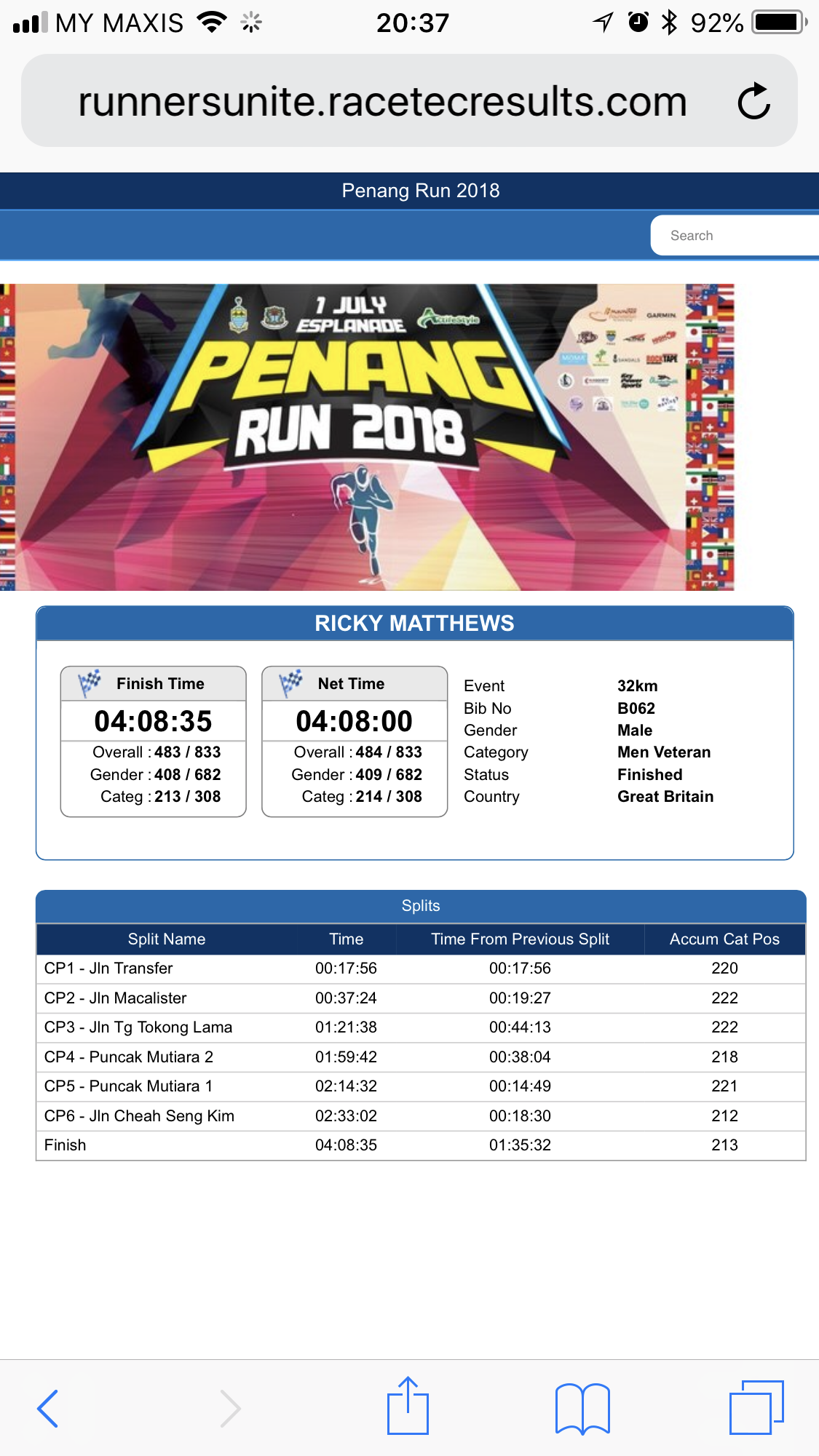 Only negative was that kit collection could have been quicker.

Poor – nice start but the heavy rain upon reaching Pearl Hill was not welcome.

32km – I was not really ready for this. After Boston and a few niggles it was longer than I needed, but good to get through it.

Special thanks to Hitomi for her undying support for me and the runRICKYrun project. Great motivation seeing the family midway and at the finish….!